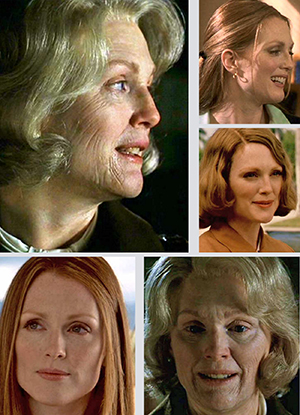 Forget all the hype about Nicole Kidman’s prosthetic nose: this was the makeup from The Hours. This makeup may have been overlooked in the publicity because making Nicole look dowdy seemed a bigger story, or simply because putting Julianne Moore into old-age makeup was a late decision added in reshoots.

Whatever, this makeup was good enough to stand up to the extreme closeups used by Stephen Daldry: it deserved and should have had an Oscar nomination. Okay she may not look 80 – just how many fifty-year ageing jumps have you seen that worked in closeup – but she does look genuinely old.